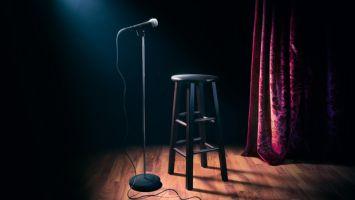 Funny Business – Intellectual Property Law Through the Prism of Comedy

By Jonathan Tonna8th May 2018No Comments

Anybody with an acute sense of justice knows what intellectual property is, yet I daresay many IP lawyers can probably relate to the unique sense of embarrassment which typically follows that all too familiar question:

Now, you know what comes next for Mr. IP Attorney – the strained beginnings of a response, the awkward backtrack and pause as he tries to squeeze out some brief, accurate yet comprehensible answer to the common follow-up question:

“What is Intellectual property?”

The problem is of course aggravated by the fact that the most basic of questions often becomes more difficult for self-styled experts to answer the more expert they become.

What must Mr. Attorney do now? Well, he could follow up with a joke.

What happened when the wheel was invented?

Mr. Attorney now has a platform for discussion, and the (charitable) laughter which hopefully follows ought to keep his audience locked in for more than the typical attention span of thirty seconds.

He might proceed to explain to his interlocutors that he could prevent them from, say, publishing his joke in a joke book, posting it on social media, or repeating it to an audience of more than a few people at – oh say – a dinner table.

Just like that, Mr. Attorney has covered many of the basic rights under copyright.

Now, he might also transition to trademark law and the case of Jeff Foxworthy of “you might be a redneck” fame. [2] Mr. Attorney could explain how a particularly clever quip could function as a badge of trade, as Mr. Foxworthy had successfully argued in the suit he brought against Custom Tees Inc. for printing a rendition of his famous catchphrase-driven jokes on a series of t-shirts.

He could carefully introduce the subject of patents and proceed to explain why most comedians – with the possible exception of prop comics – probably wouldn’t have much use for them, unless of course they invented some sort of pocket-held device that would laugh on cue at everything they said

No, that was not a poor attempt at humour. That was, in fact, the precise subject of a little-known US patent application. [3]

Mr. Attorney could stop there and indeed he probably should. There’s only so much talk of intellectual property most sane people can stomach and he would not want to estrange the precious few friends he has. However, should fortune provide him with an audience interested enough to hear more (and assuming optimism does not blind him to the much higher probability that they are not), he could segue into a more curious socio-legal phenomenon well-illustrated in the world of comedy.

As artists, comedians are unique in their indifference to the law of intellectual property. Put simply, if slightly cruelly, they have little use for IP lawyers. The issue has been discussed by a few writers – most notably by Oliar and Springman. [4] In fact, everything written on the subject to date might well be regarded as either derivative of or reactionary to their 2008 article in Virginia Law Review including, now, the words which follow.

Let’s start with the pointed facts:

Fact no. 2: To add insult to injury (as is their metier) the comedians appear to have come up with their own system – a system where justice is meted out swiftly and extra-judicially, often with the support of a mob of devotees. [5] What’s more, this system, apparently, works rather better than the system that has resulted from the combined efforts of some of the brightest legal minds of the last three hundred odd years (hence fact no. 1).

Some readers may find all this a little disconcerting. They oughtn’t to. This phenomenon is not unique to the world of comedy nor, for that matter, is it unique to the law of intellectual property. For instance: world renown rap artist Tupac Shakur boasted about his (allegedly false) affair with the wife of rapper Biggie Smalls on a track in an album which went double platinum in the US. Boxing heavyweight champion emeritus Larry Holmes launched himself off a car, over two police officers, and dropkicked former opponent Trevor Berbick on US national television.

Neither of these incidents ended up in court. But this should come as no surprise to people familiar with the industries in which these men worked.

Now, it would be nice if comedians, boxers and rappers were simply above resorting to litigation in ways that ordinary people are not. The reality is probably less magnanimous, however. What follows is not so much a dissent from the conventional wisdom on the issue so much as the practical significance that is often ascribed to it.

First there’s the lack of financial sense. It is true that the costs of litigation for alleged intellectual property theft, more often than not, outweigh the benefits for comedians. The most common offence is joke-stealing and there simply isn’t much value in any one joke (it took five counts of joke-theft for Alex Kasberg to file proceedings against Conan’O’Brien last year [6]).

Then again, there is little value in most things people bicker over – barely enough to cover the fuel for a single round trip to court in many cases. So, many cases don’t end up in court. But, then, this is nothing new.

It is also true that the rules informally agreed upon by ordinary people on the subject of humour have conspired to defeat the purpose of copyright laws in the comedy world. Just as a joke is only funny once, it is in bad taste to appropriate someone else’s sense of humour and pass it off as one’s own. These are social rules which pre-date the law of copyright by several millennia and ordinary people are often quite prepared to enforce those rules by pointing it out to their peers. So, it shouldn’t come as much of a surprise that stand-up comedians instantly pay a price when they are caught breaking these rules in public. This does not seem to speak as much to the deficiencies of the law as it does to the fact that humour has been a social lubricant much longer than it has been a multi-million-dollar industry.

Another point worth remembering is that comedy is a blood sport, and there’s no more to be gained by a comedian in the way of street-cred for a copyright victory than a rapper might gain from a successful defamation claim (much less a boxer for pressing physical assault charges!). Such behaviour is more likely to damage marketability. Public humiliation, on the other hand, can prove as effective a sanction as any, costs nothing, and can be and is often enforced against much less rigid legal standards, which brings us, finally, to the point.

Does the law of intellectual property effectively cater to the squabbles of comedians? Probably not.

What does that say? Well, not much, at least to the extent that – short of a special law regulating comedy (don’t hold your breath!) – it is impossible for any sane legal system to cater to the behavioural standards of comedians.

One might well enjoy discussing the Copyright Act in the People’s Republic of Comitopia, but other than that there does not seem to be much point to the discussion.

To be sure, there’s plenty that the law has struggled with and continues to struggle with. This is especially true of the law of copyright. But the world of comedy, being a not uncommon anomaly, has nothing to offer in correcting any of these problems.

“Why talk about it, then?” you might ask (from across the dinner table).